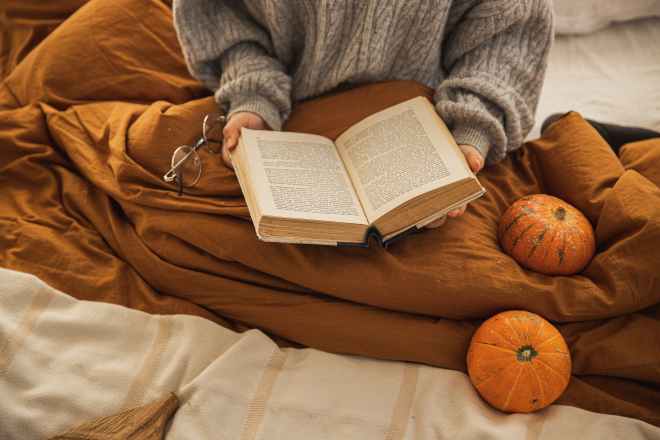 As we know, we are still living in a pandemic. I’m tired, you’re tired, we’re all tired.

Since we’re all following quarantine guidelines and staying home almost 8 months later, and we’re starting to see all the Fall holidays coming up, we have to be a bit more creative with how we celebrate this year. I mean, to me, I love staying home for Halloween seeing as I’ve never been the biggest Halloween person. Sure, it’s fun dressing up as a kid but overtime it loses its appeal.

So, now that it’s almost Halloween and we can’t have kids trick-or-treat or go out to parties with friends, what better way to get into the spirit than by reading a dark, spooky-type book? It sounds pretty fun to me.

These are some titles that might not necessarily be Halloween themed but they should be some level of scary or spooky to make you feel like you’re properly celebrating the holiday.

Galaxy “Alex” Stern is the most unlikely member of Yale’s freshman class. Raised in the Los Angeles hinterlands by a hippie mom, Alex dropped out of school early and into a world of shady drug dealer boyfriends, dead-end jobs, and much, much worse. By age twenty, in fact, she is the sole survivor of a horrific, unsolved multiple homicide. Some might say she’s thrown her life away. But at her hospital bed, Alex is offered a second chance: to attend one of the world’s most elite universities on a full ride. What’s the catch, and why her?

Still searching for answers to this herself, Alex arrives in New Haven tasked by her mysterious benefactors with monitoring the activities of Yale’s secret societies. These eight windowless “tombs” are well-known to be haunts of the future rich and powerful, from high-ranking politicos to Wall Street and Hollywood’s biggest players. But their occult activities are revealed to be more sinister and more extraordinary than any paranoid imagination might conceive.

Every generation on the island of Fennbirn, a set of triplets is born: three queens, all equal heirs to the crown and each possessor of a coveted magic. Mirabella is a fierce elemental, able to spark hungry flames or vicious storms at the snap of her fingers. Katharine is a poisoner, one who can ingest the deadliest poisons without so much as a stomachache. Arsinoe, a naturalist, is said to have the ability to bloom the reddest rose and control the fiercest of lions.

But becoming the Queen Crowned isn’t solely a matter of royal birth. Each sister has to fight for it. And it’s not just a game of win or lose … it’s life or death. The night the sisters turn sixteen, the battle begins. The last queen standing gets the crown.

If only it was that simple. Katharine is unable to tolerate the weakest poison, and Arsinoe, no matter how hard she tries, can’t make even a weed grow. The two queens have been shamefully faking their powers, taking care to keep each other, the island, and their powerful sister Mirabella none the wiser. But with alliances being formed, betrayals taking shape, and ruthless revenge haunting the queens’ every move, one thing is certain: the last queen standing might not be the strongest … but she may be the darkest.

The Bone Houses by Emily Lloyd-Jones

Seventeen-year-old Aderyn (“Ryn”) only cares about two things: her family, and her family’s graveyard. And right now, both are in dire straits. Since the death of their parents, Ryn and her siblings have been scraping together a meager existence as gravediggers in the remote village of Colbren, which sits at the foot of a harsh and deadly mountain range that was once home to the fae. The problem with being a gravedigger in Colbren, though, is that the dead don’t always stay dead.

The risen corpses are known as “bone houses,” and legend says that they’re the result of a decades-old curse. When Ellis, an apprentice mapmaker with a mysterious past, arrives in town, the bone houses attack with new ferocity. What is it that draws them near? And more importantly, how can they be stopped for good?

Together, Ellis and Ryn embark on a journey that will take them deep into the heart of the mountains, where they will have to face both the curse and the long-hidden truths about themselves.

Beware of the woods and the dark, dank deep.

He’ll follow you home, and he won’t let you sleep.

Who are the Sawkill Girls?

Marion: the new girl. Awkward and plain, steady and dependable. Weighed down by tragedy and hungry for love she’s sure she’ll never find.

Zoey: the pariah. Luckless and lonely, hurting but hiding it. Aching with grief and dreaming of vanished girls. Maybe she’s broken—or maybe everyone else is.

Val: the queen bee. Gorgeous and privileged, ruthless and regal. Words like silk and eyes like knives, a heart made of secrets and a mouth full of lies.

Their stories come together on the island of Sawkill Rock, where gleaming horses graze in rolling pastures and cold waves crash against black cliffs. Where kids whisper the legend of an insidious monster at parties and around campfires.

Where girls have been disappearing for decades, stolen away by a ravenous evil no one has dared to fight… until now.

The Unbecoming of Mara Dyer by Michelle Hodkin

Mara Dyer believes life can’t get any stranger than waking up in a hospital with no memory of how she got there.

She believes there must be more to the accident she can’t remember that killed her friends and left her strangely unharmed.

She doesn’t believe that after everything she’s been through, she can fall in love.

From the national bestselling author of Alice comes a familiar story with a dark hook—a tale about Peter Pan and the friend who became his nemesis, a nemesis who may not be the blackhearted villain Peter says he is…

There is one version of my story that everyone knows. And then there is the truth. This is how it happened. How I went from being Peter Pan’s first—and favorite—lost boy to his greatest enemy.

Peter brought me to his island because there were no rules and no grownups to make us mind. He brought boys from the Other Place to join in the fun, but Peter’s idea of fun is sharper than a pirate’s sword. Because it’s never been all fun and games on the island. Our neighbors are pirates and monsters. Our toys are knife and stick and rock—the kinds of playthings that bite.

Peter promised we would all be young and happy forever. Peter lies.

And if none of these suit your fancy, head on over to Disney+ and have a Halloween DCOM movie marathon. I highly recommend Twitches and Don’t Look Under The Bed.